Many plastic items that Americans put in their recycling bins aren’t being recycled at all, according to a major new survey of hundreds of recycling facilities across the US.

The research, conducted by Greenpeace and released on Tuesday, found that out of 367 recycling recovery facilities surveyed none could process coffee pods, fewer than 15% accepted plastic clamshells – such as those used to package fruit, salad or baked goods – and only a tiny percentage took plates, cups, bags and trays.

The findings confirm the results of a Guardian investigation last year, which revealed that numerous types of plastics are being sent straight to landfill in the wake of China’s crackdown on US recycling exports. Greenpeace’s findings also suggest that numerous products labeled as recyclable in fact have virtually no market as new products.

While the report found there is still a strong recycling market for bottles and jugs labeled #1 or #2, such as plastic water bottles and milk containers, the pipeline has bottomed out for many plastics labelled #3-7, which fall into a category dubbed “mixed plastics”. While often marketed by brands as recyclable, these plastics are hard for recyclers to repurpose and are often landfilled, causing confusion for consumers.

“This report shows that one of the best things to do to save recycling is to stop claiming that everything is recyclable,” said John Hocevar, director of Greenpeace’s Oceans Campaign. “We have to talk to companies about not producing so much throw-away plastic that ends up in the ocean or in incinerators.”

In a news release accompanying the report, Greenpeace threatened to file federal complaints against manufacturers who mislead the public about the recyclability of their packaging.

Jan Dell, the founder of the Last Beach Cleanup and the leader of Greenpeace’s survey team, said the point of the report “was not to kill recycling, it was to show which products are recyclable and which are not”.

She emphasized that bottles and jugs are indeed worth recycling, but said “our findings show that many items commonly found in beach cleanups – cups, bags, trays, plates and cutlery – are not recyclable. In America’s municipal recycling system, they are contaminants.”

The US recycling economy was upended in 2018 when China enacted bans on imports of most US recycling, leaving recycling companies at a loose end. The report chronicled how dozens of cities – stretching from Erie, Pennsylvania, to San Carlos, California, – have either stopped taking mixed plastics or are sending them to landfill.

The report noted that recyclers often report “mixed plastics” as having negative value – in other words, they cost money to get rid of. Additionally, it cited federal studies that have estimated that fewer than 5% of these products get reprocessed into new products.

Martin Bourque, the director of the Ecology Center, which handles recycling for Berkeley, California, told the Guardian that the city is spending about $50,000 a year attempting to recycle material that largely isn’t recyclable. Berkeley pays to send its mixed plastic to an extra sorting facility in southern California – and half of it still gets thrown out, he said.

“Let’s just get real about what is recyclable,” he said. “Now instead of making money [by reclaiming valuable recyclables], we’re paying $75 a ton to subsidize these brands and packagers, who make all this stuff.”

The report claims that advertising this almost-impossible-to-recycle plastic packaging as recyclable violates the Federal Trade Commission’s Green Guides, which state that “marketers must ensure that all reasonable interpretations of their claims are truthful, not misleading, and supported by a reasonable basis”.

Asked to comment on the report’s findings, the Sustainable Packaging Coalition, which represents brands trying to improve packaging, acknowledged the recycling industry was facing disruption but said that new US processing capacity was being developed to enhance the recyclability of products.

“I think our industry is rebuilding and adding capacity and that’s a good thing,” said Nina Goodrich, the director of the coalition. “We should be processing our material at home.”

Kelly Cramer, who leads the organization’s efforts to create a standard labeling system for products, said the organization is now advising consumers to “get to know their local recycling program” by checking locally with their waste services provider to see if packages are recyclable.

“It’s perfectly acceptable to be disappointed that we have a fragmented, difficult to understand recycling system,” Cramer says. “We have always told people when packages aren’t recyclable and should be left out of the bin to help prevent contamination in the stream. For example, 3s and 7s have always been labeled not recyclable in our program history. Given the problems with our recycling system and the complexity of packaging, the most effective strategy might be challenging the companies that aren’t labeling their packaging at all.”

Kate Bailey, a manager for Eco-Cycle Solutions which runs the recycling program in Boulder, Colorado, said that her organization has found outlets that will process most of its mixed plastic, because its hi-tech machinery and devoted customer base gives it the ability to sort the material into unusually clean bales. But she said this is a challenge for many recyclers, especially since these materials currently fetch record low prices.

She hopes the problems that China’s decision has caused for the domestic recycling market will lead to long-term improvements in the US.

“The silver lining is that we’re starting to have some conversations about who should be paying for recycling,” she said. “Turning to cities and residents to pay for recycling is not the way it should be going.”

“We [the recyclers] are the scapegoats, but we don’t control how products are made,” she said. “If manufacturers are going to make these products, they should be buying them back. They can be the ones closing the loop.

Courtesy of the Guardian.com 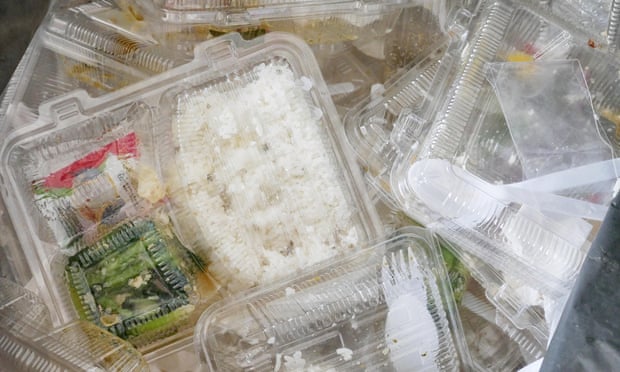