GIDDINGS AND CUNNIFF GET THEIR 2019 SEASON UNDERWAY

2019 sees a new chapter for the James Giddings Rallying team! After all the success that 2018 brought, James will bedriving the Castrol Fiesta R2, as part of the prize for winning the 2018 MRF Tyres Fiesta ST Trophy. The prize alsoincludes support from MRF Competition tyres, and a set of racing overalls courtesy of Vital equipment and Torq racewear.The R2 class has for years been one of the most competitive classes in rallying, and provides a good step up on theladder of opportunity. For 2019 James will be using the car in the Rallye R2 Cup, which runs along the BTRDA series.

“I’m very excited to get this season underway! James explained. I’ve always wanted to get in an R2 spec car since Istarted rallying 5 years ago, and to have the opportunity to do a full season in a car is amazing! The guys at the STTrophy have worked hard to get the Castrol R2 as a prize drive, and I can’t thank them enough! I’m also proud to berepresenting MRF Tyres for the season. They provided great support last year during the Fiesta St Trophy so I’m lookingforward to representing them again.”

The first round of the Rallye R2 Cup would see James and co-driver Sion Cunniff heading to Llandudno in North Wales, forthe Cambrian rally. The event has run as a forest stage rally since 1977, and uses some iconic stages such as Clocaenogand Alwen, which are also used in the World Rally Championship round Wales Rally Gb.

As this was the pairs first competitive outing in this speccar, the plan was to get a feeling for the car in the morningloop, this being said James managed to set 3rd fastest timein the class on the opening stage. The conditions weremuddy and slippery, but the nimble R2 was well suited tothe stage!

Stage 2 brought slightly drier conditions. Alwen, the longeststage of rally, is well known as a fast stage, but 3 miles inJames picked up a puncture. This would drop the pair downto 8th position in class.

A quick wheel change on the road section meant the crew could try and make back some time in the 3rd and last stage ofthe morning loop. But it was not to be. Near the end of the stage James ran wide on a long harpin left, stalling the carand nearly putting the car off the road down a steep bank! When the crew arrived back in Llandudno for the middayservice halt, they would find themselves sitting in 7th position

“We have had a tricky morning” James said. “Thecar is so much fun to drive, and in stage 1 it didn’ttake long for me to get settled in the car! I washappy to only be a few seconds from the lead inthis first run. In stage 2 we picked up a puncturebut carried on driving with it, it wasn’t too hard todrive with but of course we lost quite a lot of time!I knew I had a lot of time to make up so decided tohave a bit of a push on stage 3! We were on for areally good time, the car and tyres were workingwell, but then coming into an open hairpin left Iout braked myself and we nearly put the car offdown a steep bank. Luckily, we didn’t, but thenstalled the car in doing so, losing us more time!I’ve definitely learned some valuable lessons thismorning!”

The afternoon loop included 2 new stages, and 2 re-runsfrom the morning. For James and Sion these would berelatively problem free. In stage 4 everything was back tonormal, with a time just 6 seconds from the class leaders,meaning the pair jumped up by 2 places into 5th, and just 9seconds from 4th place.

Stage 5 was one to forget, James was on for a push yetagain to make up lost time, and in doing so ran widenarrowly missing a ditch and stalling the car, meaning theywould lose 10 seconds on the stage. Despite this mishap,James and Sion still reduced to gap to 4th place by another4 seconds.

The 2 remaining stages were re runs of the morning loop, so with some familiarity James manged a clean run on both.After setting a time just 2 seconds from the class leader on the final stage, James and Sion finished the rally in 4th, just 8seconds from 3rd place.

I’m happy with how this rally has gone! For my first experience in the R2 class, I’m really pleased to know that I can beon pace. Yes, we’ve had some problems throughout the day, but they are all lessons for me and to come back from 8thposition and finish 4th is something I’m very pleased with.

James would like to thank all his sponsors for this year’s support, and looks forward to representing them again at theMalcolm Wilson Rally in just 3 weeks’ time. 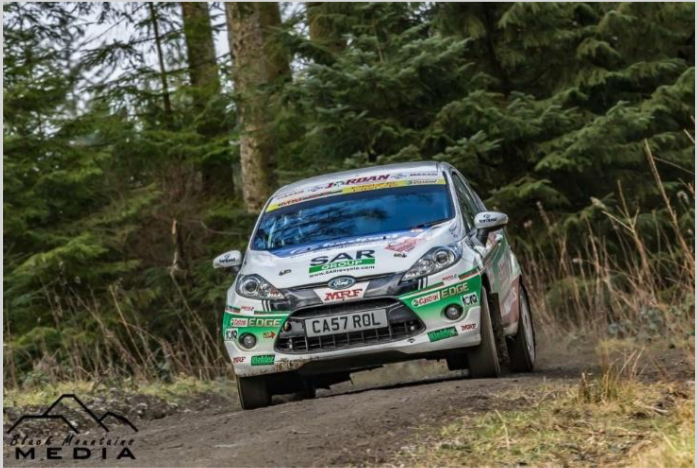