A used tire, a jigsaw, a drill, and a few bolts. Those are the basic components of a simple new barrier to separate car traffic from bike lanes.

The design is the winner of the Build a Better Barrier Challenge, a design competition to improve the flimsy and costly bike lane barriers used in many cities. The skinny plastic poles commonly used to create a barrier between car and bike lanes often end up like roadkill, flat on the ground after being driven over—and that’s if they exist in the first place. Many cities barely have barriers between car and bike lanes, and some have no bike lanes at all. The design competition, sponsored by the shared scooter and e-bike company Spin, was intended to fill this gap by creating a cheaper and more durable version that cities can easily put in place. With the expansion of temporary road closures and the surge in cycling during COVID-19, this new barrier could be the quick solution many cities need.

The winning concept was designed by Caressa Givens and Arthur Talayko of Milwaukee. She’s a program manager at statewide bicycle organization Wisconsin Bike Fed, and he’s an industrial designer. The two met while studying at the Milwaukee Institute of Art and Design and saw the competition as a perfect combination of their interests.

Their design, called WeCLAIM, is based on a simple traffic-calming tactic Givens has used for community events with the Wisconsin Bike Fed. “I feel like I am the tire lady,” she explains in an email. “We usually bring whole tires and just stack them up. They do work out well, they just kind of look like a junk parade.”

Talayko says they wanted to build on that do-it-yourself simplicity, but with a little added refinement. “If we were going to do this from scratch, with no other involvement from anybody else, what can we actually make?”

A key principle behind the design was that it be something a company could manufacture but also something that community groups could make and repair themselves, unlike the barriers in many cities. “You see a lot of them on the street that have either been knocked over or driven over or vandalized,” Talayko says. “Usually, you have to wait for the city to do something about it. But in this approach, maybe it could be community driven and people could repair their own.”

They proposed three different designs: an oval-shaped planter, a rainbow-shaped bump, and a vertical post. Each requires one tire, a few bolts, and some reflective tape for added visibility.

Their material of choice is ubiquitous. In the U.S., nearly 300 million tires become scrap every year. About 80% of them are reused or reprocessed into things such as fuel or ground rubber, but many still end up in landfills where they can take hundreds of years to decompose.

Spin and its parent company, carmaker Ford, are connecting Givens and Talayko with D-Ford, its internal design firm, to produce a refined prototype of the barrier. They’re also going to help forge a partnership with a manufacturer who can explore how to produce the barrier at scale. That doesn’t mean it will be rolling out in cities across the country anytime soon, says Kay Cheng, Spin’s streets program director and city planner who notes the “nightmare” of government procurement processes. “But what it could do and has done is start to open up the dialogue of asking if there are other ways we can approach this design,” she says.

Talayko and Givens plan to make the barrier assembly instructions open source, and are hopeful that people will take their design and start making their own barriers. Givens says the project is especially pertinent in her home city. “Milwaukee, like many cities, needs opportunities to experience the benefits of a well-connected micromobility network without all of the cost,” Givens says. “For lack of a better term, I think we need to be on a warpath to back-engineer our cities so that they are people-centered like they were in the late 1800s, for example, but with 21st-century technology, and just a little less mud.”

A few old tires could be a start.

Courtesy of the fastcompany.com 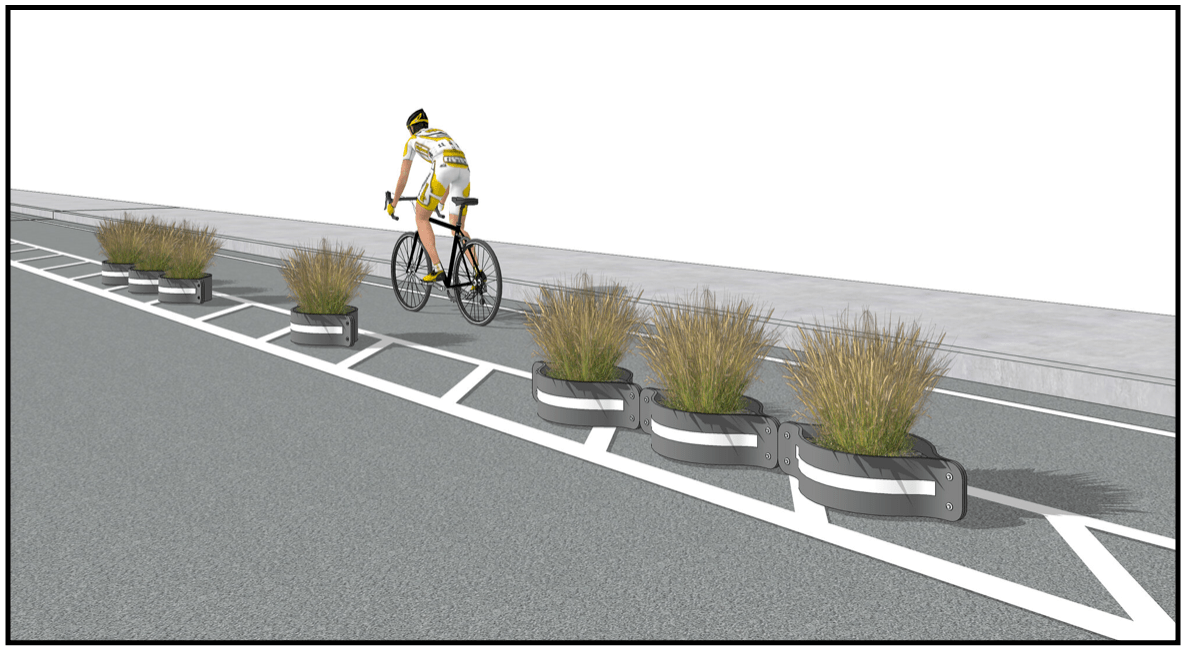