There's a microbe, that could potentialy help us mine metals in other planets.

Microbes may be the friends of future colonists living off the land on the moon, Mars or elsewhere in the solar system and aiming to establish self-sufficient homes.

Space colonists, like people on Earth, will need what are known as rare earth elements, which are critical to modern technologies. These 17 elements, with daunting names like yttrium, lanthanum, neodymium and gadolinium, are sparsely distributed in the Earth’s crust. Without the rare earths, we wouldn’t have certain lasers, metallic alloys and powerful magnets that are used in cellphones and electric cars.

But mining them on Earth today is an arduous process. It requires crushing tons of ore and then extracting smidgens of these metals using chemicals that leave behind rivers of toxic waste water.

Experiments conducted aboard the International Space Station show that a potentially cleaner, more efficient method could work on other worlds: let bacteria do the messy work of separating rare earth elements from rock.

“The idea is the biology is essentially catalyzing a reaction that would occur very slowly without the biology,” said Charles S. Cockell, a professor of astrobiology at the University of Edinburgh.

On Earth, such biomining techniques are already used to produce 10 to 20 percent of the world’s copper and also at some gold mines; scientists have identified microbes that help leach rare earth elements out of rocks.

Dr. Cockell and his colleagues wanted to know whether these microbes would still live and function as effectively on Mars, where the pull of gravity on the surface is just 38 percent of Earth’s, or even when there is no gravity at all. So they sent some of them to the International Space Station last year.

The results, published Tuesday in the journal Nature Communications, show that at least one of those bacteria, a species named Sphingomonas desiccabilis, is unfazed by differing forces of gravity.

In the experiment, called BioRock, 36 samples were launched to orbit in match box-size containers with slices of basalt (a common rock made of cooled lava). Half of the samples contained one of three types of bacteria; the others contained just basalt.

At the space station, Luca Parmitano, a European Space Agency astronaut, placed some of them in a centrifuge spun at speeds to simulate Mars or Earth gravity. Other samples experienced the free-floating environment of space. Additional control experiments were conducted on the ground.

After 21 days, the bacteria were killed, and the samples returned to Earth for analysis.

For two of the three types of bacteria, the results were disappointing. But S. desiccabilis increased the amount of rare earth elements extracted from the basalt by roughly a factor of two, even in the zero-gravity environment.

“That surprised us,” Dr. Cockell said, explaining that without gravity, there is no convection that usually carries away waste from the bacteria and replenishes nutrients around the cells.

“One might then hypothesize that microgravity would stop the microbes from doing biomining or it would stress them to the point where they weren’t doing biomining,” he said. “In fact, we saw no effect at all.”

The results were even somewhat better for the lower Mars gravity.

Payam Rasoulnia, a doctoral student at Tampere University in Finland who has studied biomining of rare earth elements, called the BioRock experiment’s results interesting, but noted that the yields were “very low even in the ground experiments.”

Dr. Cockell said BioRock was not designed to optimize extraction. “We’re really looking at the fundamental process that underpins biomining,” he said. “But certainly this isn’t a demonstration of commercial biomining.”

The next SpaceX cargo mission to the space station, currently scheduled for December, will carry a follow-up experiment called BioAsteroid. Instead of basalt, the match box-size containers will contain pieces of meteorites and fungi. They, rather than bacteria, will be the agents they test for breaking down the rock.

“I think eventually, you could scale this up to do it on Mars,” Dr. Cockell said 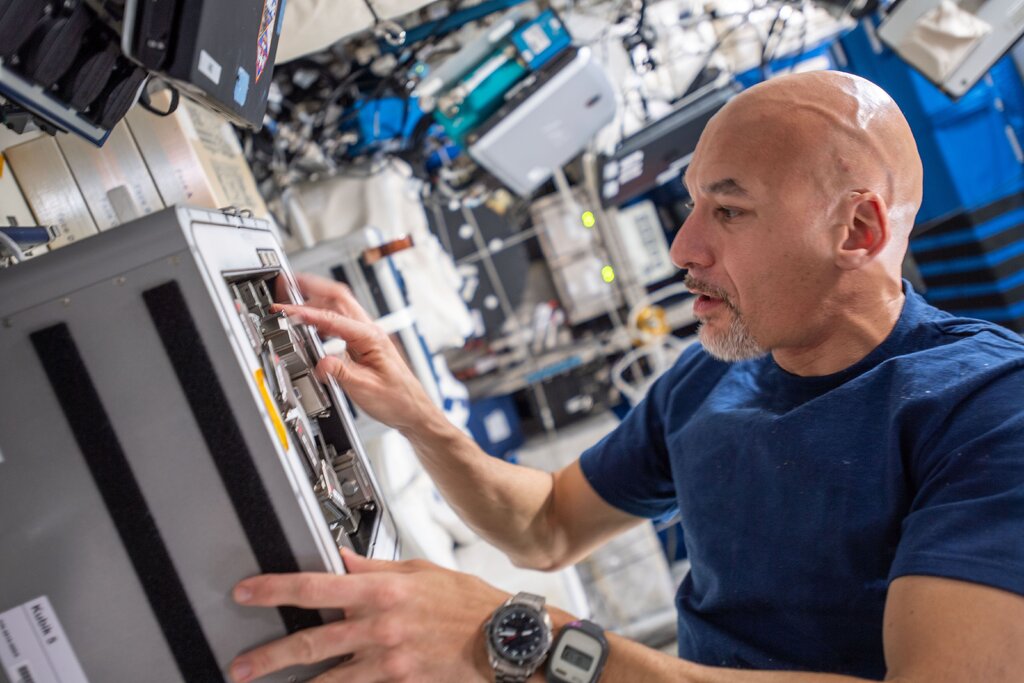