When is it time to go for your old cat?

Catalytic converters live toward the end of your exhaust system just before the tailpipe (usually). They take harmful gasses that are the result of the combustion process and turn them into less harmful gasses via chemical reactions before releasing them into the atmosphere. But a bad catalytic converter causes more trouble than just increased emissions — it will affect performance, sometimes to the point of a no-start condition. While they are usually dependable parts with long lifespans, they are not infallible, and knowing different diagnostic procedures can help you get to the bottom of things.

Common signs of failure include a loss of power, both at idle and upon acceleration. This is because “cats” usually fail when they become clogged. Since they are in line with the exhaust system, a clogged cat will prevent necessary airflow through the system all the way back to combustion and will throw off the proper air-fuel ratio. This, in turn, lowers your fuel efficiency, so you’ll notice a decrease in mpg. You may also notice a rotten egg odor, coming from the fouled inner chemical mechanism that has been exposed to too much unburned fuel or bypassed oil or coolant. The sound of rattling from inside the catalytic converter when it’s shaken is also a pretty straightforward indication of failure.

There Must Be Another Way

The easiest test requiring the fewest special tools is simply removing the oxygen sensor or loosening the exhaust pipe connection upwind of the catalytic converter. If you briefly run the engine with these disconnected (oxygen sensor) or loose (pipe) and the condition improves, you are probably looking at a bad cat. When you allow these additional passages of air, you provide a different route for air and exhaust rather than the cat. Just note that in many places it is illegal to run an engine that bypasses the cat and vents directly into the atmosphere, even for a minute.

For testing more on the up and up, you’ll need an infrared thermometer. Run the engine until it reaches normal operating temperature, around 10 minutes. Then aim the thermometer at the upstream end of the cat (don’t touch it, it’s hot!) and the downstream end of the cat and note any difference in temperature. If there is a major disparity where the engine-side is significantly warmer, this indicates the gasses aren’t passing through.

Existing in a Vacuum

Lastly, you can use a vacuum gauge. Place it on a direct intake vacuum line (such as from the brake booster). Make sure the vehicle is in park with the parking brake engaged and have a friend bring the RPMs to about 2500–3000 RPMs and hold it there while you watch the gauge. At normal idle, you should see a vacuum pressure of 16–21. When the RPMs rise, the vacuum should fall, but then return within a few seconds. If it stays low or is super slow to return, that points to back pressure.

Even if you’ve diagnosed a bad catalytic converter, it’s important to look into possible underlying causes for the failure. These are usually a rich mixture, blown head gasket, or something that has allowed oil or coolant into the system. Make sure to tackle this underlying problem too, or you’re setting yourself up for another bad cat diagnosis later on. 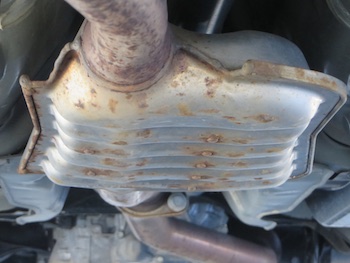