Where does the UK waste and rubbish go?

UK Prime Minister Boris Johnson has said that recycling "doesn't work" and that we have to reduce our use of plastic.

How much waste does the UK produce?

England was responsible for 85% of the total.

Construction and demolition generates the most - about 136 million tonnes a year. Mineral waste accounts for 36% of the total and includes anything that's left over from mining or quarrying, and can't be used again.

The latest figures available show that UK households produced just under 27 million tonnes of waste in 2017.

It's mostly made up of food scraps, newspapers, cardboard, glass bottles and plastics.

Much of it could be avoided. A study by the University of Sussex found that the average family in the UK throws away 20% of all the food they buy, costing up to £800 a year.

How much gets recycled?

The recycling rate for UK households' waste was 45.7% in 2017, a small increase on the previous year.

England and Scotland followed with 45.2% and 43.5% respectively.

Paper and cardboard were the most recycled materials in 2017 at 79%, followed by metal at 71.3% and glass at 67.6%. For these materials, much of the recycling is carried out in the UK.

After recycling, the most common destination for the UK's rubbish is landfill, with 24% of waste sent there in 2016.

How much of the UK's rubbish is sent abroad?

Roughly two-thirds of plastic waste in the UK is sent overseas to be recycled - in part, to reduce costs.

BBC analysis suggests the UK exported 611,000 tonnes of plastic packaging to other countries in the year to October 2018.

Until January 2018, China imported most of the world's plastic waste.

But due to concerns about contamination and pollution, it announced it would no longer buy recycled plastic scrap that was not 99.5% pure.

Malaysia, Turkey, Poland and Indonesia picked up some of the slack.

However, in recent months, Malaysia has also pushed back. The country's environment minister Yeo Bee Yin said that it will not be "a dumping ground to the world".

Malaysia has also said it would send back 3,000 tonnes of non-recyclable plastic waste to countries including the US, UK, Canada and Australia. It said the contaminated waste was smuggled in on its way to illegal processing facilities in the country.

Sustainability charity Wrap has previously suggested that the increase in UK incineration rates is down to more plastic being burnt, rather than being sent abroad after China's ban.

How do other countries recycle?

Some countries with the highest recycling rates globally include Germany, Austria and South Korea, according to a 2017 study by waste consultancy Eunomia.

Germany, for example, has had a deposit return scheme in place for plastic bottles since 2003. Retailers like supermarkets have to bear the costs, and are allowed to keep any unclaimed deposits that customers don't claim for returning the bottles.

In Japan, everything from polystyrene and shampoo bottles, to packaging for pills, can be separated and recycled in its system.

There are now also 26 certified "eco-towns", according to the Japanese environment ministry. One of them, Kamikatsu, is thought to recycle 80% of its household waste.

Locals wash and sort it into more than 45 separate categories, before taking it to the recycling centre.

How can I reduce my waste at home?

Recycling and how to cut down on single-use plastic has become a hot topic of conversation in recent years.

A few tips include:

Food is also a significant contributor to household waste. Wrap estimates that household food waste makes up 70% of the UK total.

Planning meals, freezing food and being careful not to over-buy in the shops can all help tackle food waste. 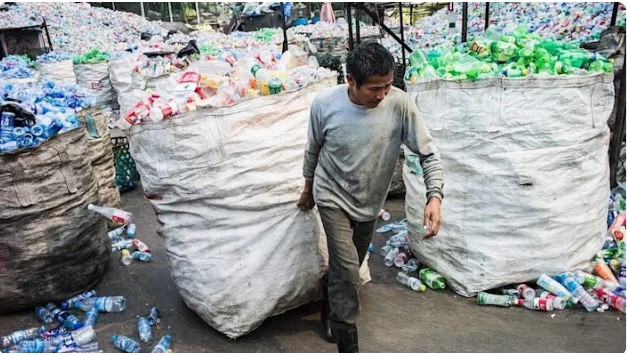