Why are clothes so hard to recycle?

“The current fashion system uses high volumes of non-renewable resources, including petroleum, extracted to produce clothes that are often used only for a short period of time, after which the materials are largely lost to landfill or incineration,” says Chetna Prajapati, who studies ways of making sustainable textiles at Loughborough University in the UK.

“This system puts pressure on valuable resources such as water, pollutes the environment and degrades ecosystems in addition to creating societal impacts on a global scale.”

There are good reasons to seek out alternatives to chucking clothes in the bin – globally the fashion industry is responsible for 10% of all greenhouse gas emissions, with textile production alone is estimated to release 1.2 billion tonnes of greenhouse gases into the atmosphere every year. Vast amounts of water are also needed to produce the clothes we wear too and the fashion industry is responsible for 20% of global waste water.

While most clothes with care will last many years, changing fashions mean their lifespan is artificially shortened by consumers changing tastes. Industry figures suggest modern clothing will have a lifespan of between 2-10 years – with underwear and t-shirts lasting just one to two years, while suits and coats last for around four to six years.

Would recycling our clothes help to reduce the toll our fashion addiction has on the environment?

Currently just 13.6% of clothes and shoes thrown away in the US end up being recycled – while the average American throws away 37kg of clothes every year. Globally just 12% of the material used for clothing ends up being recycled. Compare that to paper, glass and plastic PET bottles – which have recycling rates of 66%, 27% and 29% respectively in the US – and it is clear clothing lags behind.

Indeed, most of the recycled polyester being used now by leading fashion brands in fact comes from bottles rather than old clothing.

Much of the problem comes down to what our clothes are made from. The fabrics we drape over our bodies are complex combinations of fibres, fixtures and accessories. They are made from problematic blends of natural yarns, mand-made filaments, plastics and metals.

“For example, a 100% cotton t-shirt contains many other components such as labels and sewing threads which are usually made from another material like polyester,” says Prajapati. “Similarly, a typical pair of jeans are made from cotton yarn which is generally blended with elastane, and other components such as zips and buttons and polyester sewing thread and dyed using a range of dyes.”

This makes them hard to separate so they can be effectively recycled. Sorting textiles into different fibres and material types by hand is labour intensive, slow and requires a skilled workforce. Growing use of modern fabric blends in clothing also makes it hard to do this mechanically too, although European researchers have been developing techniques that make use of hyperspectral cameras – which can see light beyond the limits of human vision – to better identify different fabric types. Once sorted, the dyes that have been applied to the fabrics need to be removed in order for yarns to be reused.

Currently, however, very few of the clothes that are sent to be recycled are actually turned into new clothing – a process known as “material to material” recycling. Old wool jumpers, for example, can be turned into carpets, cashmere can be recycled into suits. But as of 2015, less than 1% of used clothing was recycled in this way.

While of course there is a healthy market in second-hand clothes being sold online, perhaps the most popular way of disposing of old clothes is simply to give them away so they can be reused through charity shops. Increasingly, however, clothes donations are being used as a way of simply passing on the textile waste problem to others

How is this type of waste recycled?

The majority of clothing waste is sent for recycling in some way, but about six tonnes of the garments are of such poor quality they are simply torn up so they can be used as industrial cleaning clothes and stuffing for mattresses or car seats.

Fibre recycling technologies do exist, but they are only used on a small scale. Generally, the techniques can be separated into mechanical and chemical recycling.

“Blends are most suitable for mechanical fibre recycling, where fabrics are shredded and pulled to transform them into fibres of shorter length,” says Prajapati. Shorter fibre length produces fabrics of lower quality and strength, so the results from this kind of recycling can’t be used for clothing. Instead these tend to then be “downcycled” to produce other composite fibre materials such as thermal insulation or carpet for use in the building industry. Some researchers have found ways of creating noise insulation from old textile fibres.

Chemical fibre recycling for fabrics with large quantities of one type of fibre, for example polyester and nylon are well established, says Prajapati. “However, they consist of multiple processes and additional chemicals, making the process and resulting yarn or fabric costly,” she says.

There has been success on a smaller scale to effectively separate natural and synthetic blends and capture both types of fibres, without losing either fibre in the process. However, scaling up this technology to an industrial scale remains the challenge. 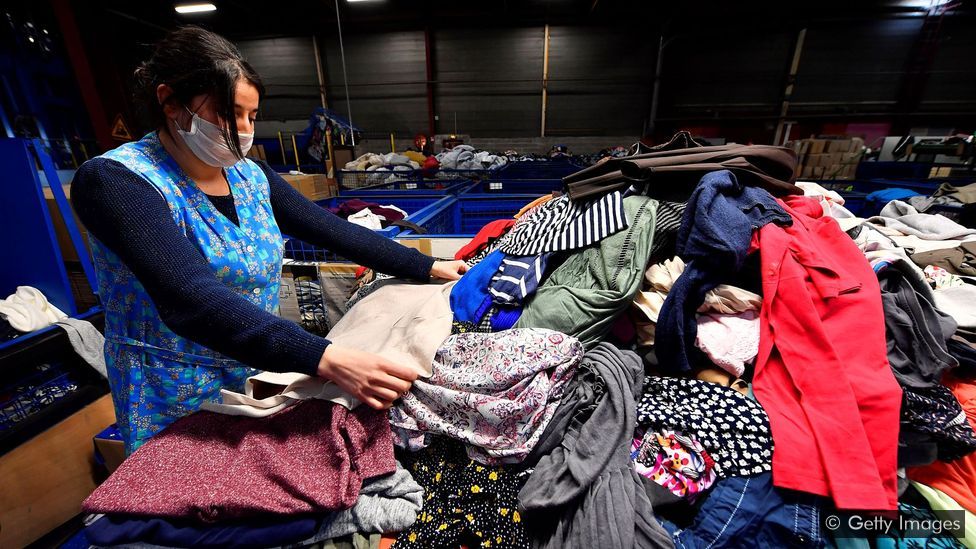