Why Sri Lanka is sending waste to the UK?

Sri Lanka has started shipping about 240 containers of hazardous waste, which includes body parts from mortuaries, back to Britain, following a two-year court battle.

Last year, the Sri Lankan government asked Britain to take back over 100 containers that the latter had exported to Sri Lanka. The containers were shipped in 2017, and contained clinical waste, used cushions and mattresses, plant parts, plastic waste and other hazardous and uncategorised waste.

They were inspected last July, when some officials complained about a horrible smell emanating from them. After this, Sri Lanka’s Centre for Environmental Justice (CEJ) filed a writ application against the illegal activity.

Issues raised by CEJ in its writ application

The petition included issues such as severe damage to the environment and severe threats to the health of the general public of the country. “Also, population will be exposed to several health risks due to the pathogens in the clinic or other waste found in the imported waste. This could also have negative impacts on the bio-diversity,” CEJ said in a statement.

The application also noted that the waste was imported without adhering to the terms of the BASEL Convention, as per which Sri Lanka has restricted the import of hazardous waste.

In June 2019, the BBC reported that some wealthy western nations ship their waste to developing countries since it is cheaper, helps to meet their recycling targets and also reduces domestic landfill.  On the other hand, for developing countries, taking this waste acts as a source of income.

But oftentimes, contaminated plastic and rubbish gets mixed with material meant for recycling, which eventually ends up in illegal processing centres.

According to the BBC, Sri Lanka is not the only Asian country angered by the dumping of waste disguised as material meant for recycling by a western country.

Previously, Cambodia has sent back containers of waste back to the US and Canada. The Philippines, Indonesia and Malaysia have also reported similar incidents.

On October 28, a consignment of 21 containers that were illegally exported to Sri Lanka was received by England.

The UK’s Environment Agency will now confirm the types of illegal waste that was exported and investigate who shipped it. The responsible individuals could face a custodial sentence of up to two years, an unlimited fine and the recovery of money and assets gained through the course of the illegal activity. 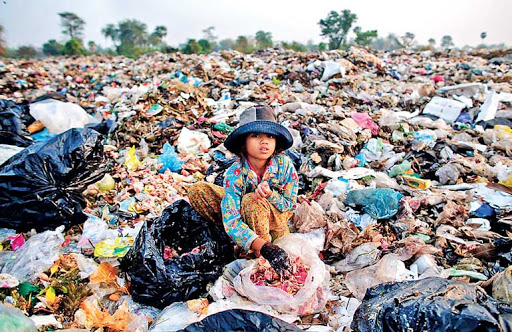